Q: I had a dream last night that I was sitting around with a bunch of old female friends (I’m a woman) and we were talking about haircuts. I looked in the mirror and saw that my hair was much thinner, shorter and choppier than it actually is. They were giving me advice on how to change it. I’ve had dreams in which my hair was different before, I think. What does this mean? 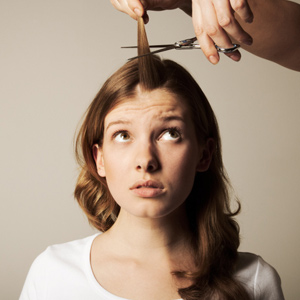 A: I find dreams about hair and haircuts fascinating. It’s just a simple image, but these dreams appear with some regularity, often catching the dreamer’s attention. It feels significant to look into the mirror in a dream and see yourself as different than you know yourself to be.

Let’s start with the archetypal layer of this dream. Prior to modern thinking, hair was often associated with virility and power.

The chiefs and magicians of the Masai, the African tribe, were afraid to lose their supernatural powers if they let their beards be cut . . . Hair is regarded as a sign of extraordinary power and magical strength. The young warriors of the Teutons cut their hair and beards only after having slain the enemy. Samson, too, was deprived of his power after Delilah had cut off his curls. (Children’s Dreams, p. 105)

Indeed, Samson, the strong man of the Bible, has supernatural strength because of his hair. Nothing can stop him or get in his way, until his wife cuts his hair when he is asleep and he awakes to find himself weak and powerless.

These mythological stories — like so many others — may be more true to reality than we originally thought. I’m intrigued by reports that the United States military conducted tests in the Vietnam War on new Native American recruits before they received their military haircuts and after. I can’t verify this story myself, but these military experiments apparently convinced even the most skeptical researchers that the men’s long hair had provided them with a profound intuition that gave them a significant edge in battle. Like Samson, when their hair was cut, they lost their unique skills as soldiers and were in danger much more often. It was theorized that their hair (our human hair) acted like the antennas of insects and whiskers of animals, providing an avenue of sensory input for the surrounding world. (Go ahead and read this article for more information on this research).

So how does this all relate to your dream?

When you look in the mirror, you’re surprised by what you see. Your hair is thinner, shorter and choppier than you know it to be and you’re surprised. In fact, you seem discomforted by this, as if in this moment you feel less confident than before. You don’t think, “Aha! Look at my hair!” Instead, your adjectives betray some confusion and disappointment. Does witnessing yourself in the mirror feel disconcerting? Do you feel less confident than you typically do? Your dream may be reflecting something about how you appear to others (at least in the current moment) not exactly as you perceive yourself. Is your dream calling your attention to a lack of confidence or relationships that are “cutting you down”? I wonder about what this particular group of friends tells you about your identity. Explore for yourself how they connect with your self-perception. Are they people from childhood? Women related to how you learned about who you are?

Of course you know that the way we wear our hair has a dramatic influence on how we are perceived in the world (think dreadlocks versus a mohawk versus a business cut). Not to mention hair as an indicator of ethnicity and resulting social power (something the African American community knows well — just last month I saw the term “wooly-headed” in a professional magazine. Yikes! That’s still being used??). Whether it speaks to intuition or super-human strength or not, hair does still correlate to how much power we hold socially and the groups with which we associate, by choice or not.

Haircuts and hairdos also speak to changing identities in general, not just as a loss or gain of power. Yes, the move into the military involves the ceremonial loss of hair, as does the path to becoming a buddhist monk or nun. Buddhist monastics shave their head as a demonstration of the loss of attachment to worldly things. Even the passage into marriage for many women and men involves a complicated ritual of preparation in regards to her/his hair.

We can’t overlook the fact that, as an imagine, hair also reflects thoughts and ideas; the shape and style and quality of all that energy pouring out of your head. Someone may have a dream in which things are caught in their hair, for instance, pointing to a certain kind of messiness or mental infestation. Your dream indicates a change here too, one that doesn’t feel terribly positive to you. The mirror — another important symbol all by itself — reflects back a side of yourself that you can’t see alone. What we see in the mirror can help us to see ourselves both more accurately and as, strangely, separate from ourselves. We can observe what we were unable to observe before. Be it a shift in power or a shift in your thinking, something has thinned and become choppier and your dream is reflecting that back to you. Is this a shadow side in need or exploring? A mood?

If we were to sit together to explore this dream, I would invite you to delve deeper into the feelings that arise; the feeling of seeing yourself in the mirror, the feeling of contemplating a new haircut, and what you imagine that might look like. What are your attachments or insecurities in regards to your hair in waking life? I encourage you to contemplate your hair and how your identity may be shifting these days. Ask a trusted friend to sit with you and talk about the experience of seeing your hair as you did in the dream. Your dream is showing you something about who you are right now, step towards the image and take a look.

Satya is a psychotherapist in private practice in Portland, Oregon specializing in dream work, the quarter-life crisis, and work with individuals in their 20s and 30s. www.QuarterLifeCounselor.com

Free videos and tips on how to survive your twenties